The Pacific Crest Trail (PCT) is a backpacking and horseback riding trail that goes from Mexico to Canada.  It starts a few miles south of Campo, California at the Mexican border.  The trail goes up the length of California, Oregon, and Washington, ending at Monument 78 on the US/Canadian border.  Its total length is about 2,650 miles.  The actual mileages change year to year because new trail is added or rerouted due to fires. 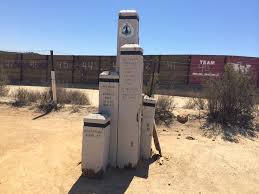 Southern Terminus of the PCT

Northern Terminus of the PCT

The PCT passes through 25 National Forests and 7 National Parks.  The highest point on the PCT is Forester Pass in the Sierra Nevada’s at 13,153′; its lowest point is at the Columbia River on the border of Oregon and Washington at 205′.

For the first 700 miles, the PCT travels through deserts and chaparral with short excursions up into the pine-covered mountains.  These mountains give hikers a short rest from the +100º temperatures at the lower elevations.  Hiking though southern California can be dry, even in spring.  Water sources dry up quickly in the oncoming summer heat.  Within the first week, hikers will come to their first long dry section, San Felipe Ridge, which starts at Scissors Crossing in the Borrego desert and ends 23 miles later at Barrel Springs.  In early spring, when the thru-hikers are coming through, it is not uncommon to get a very cold storm which can put down a layer of snow.  However, the snow will quickly melt in the following days.  The only animal that hikers need to watch out for in Southern California is the rattlesnake.  There are several types in this section:  the Western Diamondback, the Red Diamondback, the Sidewinder, and the Mojave “Green” Rattlesnake.  The Mojave Green is the most dangerous rattlesnake due to its very toxic venom.  The PCT crosses only a small section of the Mojave Green’s range.

Upon reaching Kennedy Meadows, the thru-hikers enter one of the most spectacular segments of the entire PCT:  the Sierra Nevada’s.   These mountains are the highest range on the trail.  They run all the way up to northern California and they provide the highest and hardest hiking on the PCT.  It is also has the longest road-less section, over 200 miles.  Many will take a side trip up to the highest point of the continuous 48 states – Mt Whitney (14,505′).   On a daily basis, hikers will climb up 2000- 4000 feet in elevation than to drop down into deep river valleys.  Since thru-hikers enter the Sierras in early spring, they will encounter many miles of snow covered trail and rivers swollen with freezing, cold snow melt.  Spring snow storms are common.  The nemesis of many hikers in the Sierra’s is the Black Bear.  The National Parks and Forest services, require hikers to carry heavy, bear proof containers, to protect their food.

Middle fork of the Feather River

In Northern California, the Sierras flatten out.  Thru-hikers quickly hike across pine-covered ridges and plummet into deep river valleys.  These valleys can be as much as 4,000 feet in elevation change.  Northern California has a number of these valleys:  Sierra City, Belden, Castle Crags, Seaid.  The summer heat makes these valleys very hot and humid.  Hopefully an afternoon thundershower will pass through, to relieve the heat.  These deep valleys are the home of the beautiful Timber Rattlesnakes which are a dark forest green and black.  Hikers will pass through huge, fields of wild flowers and thick groves of pine as Mt. Shasta comes into view to the northwest.  The PCT will approach it from the southeast, and then go around its west side before moving away north.  Mt. Shasta will be in view for weeks.  It’s tall peak, standing high and proud, takes on the character of a wise, old guardian of the surrounding land.  The last glimpse of it in Oregon, becomes a bittersweet good-bye.

Things change noticeably when the PCT enters Oregon.  The terrain becomes much flatter and trees dominate everywhere.  There are no big climbs and the hiking is easy.  Surprisingly, Oregon is very dry with little ground water in the way of rivers and streams.  The most common water sources for the hikers are ponds with their brackish water.  The mountains in Oregon are volcanic and the soil is very porous.  When it does rain, the water drains through the lava beds below the surface.  It is the height of summer when the thru-hikers are coming through.  The days are hot with occasional thunderstorms.  Oregon, like California, can have many forest fires and it is not uncommon to have trail closures because of them.  Most thru-hikers enjoy and plan on big miles in Oregon.  It is not common to do 30 miles days.  Hikers will pass a series of volcanic mountains as they move north.  They start in south central Oregon and continue all the way to Canada.  The ones that are in Oregon start with Mount McLoughlin and then Mount Thielsen, Three Sisters, Mount Washington, Three Fingered Jack, Mount Jefferson, and Mount Hood.  Oregon has one of the best blue blazes on the entire PCT, Eagle Creek.  The planners of the PCT should have split the horses and the hikers here; sending the horses on the existing PCT and the hikers down Eagle Creek.  As it is, most thru-hikers take the Eagle Creek alternative because it is so incredible.  Hikers head down into this deep river valley with dozens of waterfalls, deep clefts, vertical canyon walls, and thick growths of mosses and ferns.  The most impressive waterfall is Tunnel Falls, where the trail is carved out of a vertical wall and then goes behind the waterfall.  This alternative is well worth the hikers time.

The valleys abound with Blueberries and Huckleberries;  the days quickly grow shorter and the nights get much colder; cold rain, sleet, and snow begin to fall.  This is the Washington the thru-hikes head into.  There is a radical change in the terrain.  The mountains become much steeper and more rugged.  Thru-hikers will find the Northern Cascades to be one of the hardest sections to hike on the entire PCT.  The trail moves from pass to pass to pass and then drops down into the valleys only to climb back up again.  By the time the thru-hikers are passing through Washington, summer is ending and fall is coming fast.  The thru-hikers feels the need to cover many miles to get to the Canadian border before it starts to snow.  If they are not done by early October then they risk getting snowed off the trail.  Each thru-hiker hopes for an Indian Summer.  It is not uncommon to have days of continues rain and snow.  Washington is also home to one of the most dreaded, feared, and despised animals on the trail, the mouse.  They come out at night and chew holes in anything to get to your food.  If you are cowboy camping, they will even run over you while you’re in your sleeping bag.  There is little you can do to stop them, except feeding them.  A few broken crackers 5-10′ from your tent can fill them up and they usually stop bugging you.