We had another difficult, cold night. The problem was not mice. Not a one showed up. The problem we had was Mama Raven throwing up all night. She had not been feeling well yesterday.  Dizziness and tiredness were her biggest problems.  Around 10:30 pm she felt very nauseated and got up.  Less then an hour later it hit her again, buy this time she barely made it out of the tent. The last time she threw up was around three in the morning.  It was not an easy night.  We were very slow getting out of the tent.  All Mama Raven wanted to do was to sleep.  We finally got going at 8:15.  There was only 8 miles to the Canadian boarder, with only one small up and the rest was down.  Despite Mama Raven being sick, we were moving along at a good pace although a number of other hikers past us.  Everyone was hiking fast to get to the boarder.  Just after noon, we saw the boarder clear cut which is a 20′ wide clear cut running along the whole Washington\Canadan boarder.  Three switchbacks later we came to monument 78, it was 12:24.  As we walked in, all the hikers that were there applauded and cheered. There was about 15 people.  We put our packs down in the only patch of sun and started looking at the trail registry for the names of those we knew.  We signed it: The Ravens, Little Crow, and the spirit of Bling!  We had carried out special drinks for this occasion, Mama Raven had apple flavored sparkling water, Little Crow had an Arizona fruit punch, and Papa Raven had a small box of white Zinfandel wine.  Most of the other hikers we did not know but a few we did: Oso, Allsgood, and Papa Smurf who we had not seen since early on in Southern California.  Whole Roll and Rebo arrived later.  Papa Smurf was dressed as a taco and had a bottle of champagne to celebrate with. Oso played his guitar as he sat atop the monument. It was a very special moment for everyone.  None thru-hikers often ask “how’s the hike going?” We are never sure how to answer that other than its going great!  How does one explain what it is like to follow by foot, a twenty-four inch wide path from Mexico to Canada for five and a half months?  Throw on top of that the fact we decided to take along two kids.  That path we followed for so long became our home and The Ravens truly loved it.  It was not an easy path.  Many hurdles and obstacles were thrown at us and to all hikers who followed the path, but those who could stick with it found a grand reward around each turn.  Obviously, our most difficult challenge was losing Bling so close to the end of the trip.  Hikers from all over, began the adventure with heavy burdens from their normal lives.  Those cares and concerns disappeared like magic. The wild places we encountered soothed the heart and soul!  However, there is more to it than just the wild places that heal, it is the hearts of each person we crossed paths with that really taught us a lesson and brought us the greatest joy!

Papa Smurf in a taco costume 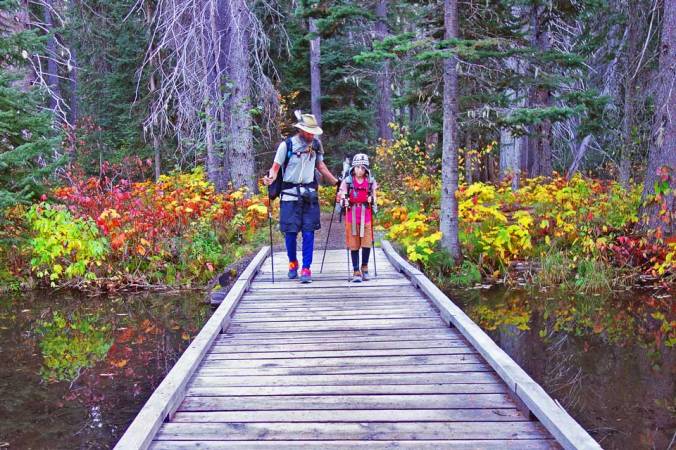