Over the years we have had many tents:   Frostline, two North Face Tadpolls, Sierra Designs Clip Flashlight, Tarptent Rain shadow.  When Will and Joon came along, we started to carry a four man tent.  The Golite Shangri-La which is a cross between a tarp and a regular tent so it was not fully enclosed.  We used it for years.   As the kids grew bigger,  it became inefficient for us and they reached a stage that they were able to sleep alone without a parent.  One big tent was unnecessary any longer.   Also, Ann was tired of sharing the tent with ants, mosquitoes and mice.  Therefore, we have switched to the following two tents.

Ann and I use The StratoSpire 2 which is a Tarptent made by Henry Shires.  It is a large two man tent that uses hiking poles to hold it up.  It is a very roomy tent.  We have enough head room for both Ann and I to sit up in.  Many evenings on the trail, all four of us have sat inside this tent and played Uno.  It has doors on both sides with large vestibules.  The only drawback is its footprint.  It is square and large.  That counts out a lot of narrow camp sites. 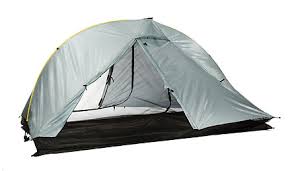 Will and Joon use the Double Rainbow which is another Henry Shires Tarptent.  When they were smaller, they could fit into the one man version of this tent.  We have had to upscale due to growing teenagers.  The tent is very easy to use.  The kids have no problems setting up and tearing it down.  One thing I really like about the Double Rainbow is the middle tensioner can be tightened from the inside.  I wish more tents had this feature.  We also got the inner-liner for the tent.  It adds very little weight and protects the kids from condensation.  The biggest drawback is how easy rain can come into the tent when you open the vestibule.  There is a small nylon flap that protects the inside from rain but in a down pore it does not work well.