Over the years, our backpacks have run the gambit from  massive Jansport D2 external frame packs to our own home-made ultra-lite packs.  One of our problems is finding packs that will fit the kids.  The length of their backs is too short for the smallest sizes of packs made by most companies.  All the gear companies make packs for adults, not children.  Bling has had a different pack every year for the last six years because they never fit correctly.  The other problem we have had with packs for the kids is the belts.  No one makes them small enough to fit their little waists.  When the kids were little we have to put a coat around their waist so the pack would ride correctly.  Gossamer Gear packs have fit the kids the best and we will continue using them. Whisper has finally gotten big enough to fit into Gossamer Gears small belt.  Now that they are older it is much easier to find equipment for them. 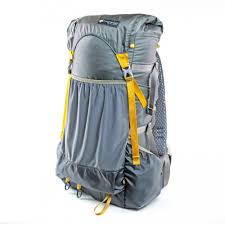 Mama Raven hiked the PCT and CDT with this pack and it held up very well, in fact, she will be using the same pack on the AT.  The size of the pack fits her well and she can fit everything that she needs in it.  Bling and Whipser need to replace their packs and will move away from the Gorilla to the Mariposa.  It is not because they dislike the Gorilla or had any problems with it, it is because of the size.  The Mariposa will hold more for the same weight. The Gorilla has an aluminum stay in the pack which helps prevent the pack from collapsing on the kids’ backs and assists in distributing the weight.  Since we put our Z-Rest pads in the pocket against the back, we need to get a belt one size larger.  This is because the pad takes up about 6″ of the belt’s length.

For many years I have carried the G4.  On the CDT I used a Mariposa. This is not because I have given up on the G4.  I like the G4’s!  It is because Gossamer Gear is not making the G4.  I talked with them and they are redesigning them.  This is a good and a bad thing.  Every time Gossamer Gear redesigns a backpack it gets heavier.

The G4 is the pack I have been using for many years.  It is a no frills, big tube.  I like having a lot of space just in case I need it.  Several years ago, on the John Muir Trail, I carried both tents and two sleeping bags.  I still had room left over for some of the food.  My pack looked huge, but it was the lightest.  For the PCT, I used this pack without any space problems.  It also had room for the big food drops and space to pack all the water we needed in the dry sections.  After 4000 miles of using the G4, it is still in good shape, but it is not ready for another long hike, hence I needed a new pack.

Whisper has moved up a medium pack.  Over the last two years Bling has put on a growth spurt and he will be carrying a large pack. The AT will be the first thru-hike in which the kids will carry the Mariposa.  We will see how they like them.

The Mariposa is the closest in size to the G4, but a good bit heaver adding 14.75 oz.  I do like the pockets on the belt.  That is a feature I have never had before and I put them to good use.  The pack road well and did not give me any problems.  In fact, one issue I have had for years is that I would get a pinched nerve in my left shoulder and my arm would start to go numb.  On the CDT I never experienced that with the Mariposa.  I never lacked for room and the back pocket was large enough to hold my snowshoes.  The only drawback I had was the top pocket.  This pocket is in the flap that covers the top of the pack.  When you attach and tighten it, the pocket bends to cover the top of the pack.  This means that you should never put anything that would break in that pocket.  I started the CDT with our tablet in it.  I tried to be very careful tighten the flap, so I would not break the tablet.  Later, I move the table to the inside hydration pocket.  This was a very safe place for it, but I then had nowhere to put my water bag.  I ending up putting the water bag sideways at the top of my pack.  Not the best solution, but you do what you have to.