Dreaming of hamburgers we got up an hour earlier than normal. The hiking was easy but hot. We had a short up, then miles of down. We did 8 miles before 10:00; that was really good for us. We then set out across Rockhouse Basin. About 3.5 miles more we got to the biggest river we have seen on the PCT, the South Fork of the Kern. Today has been the hottest day of our trip and coming upon such a sight was too tantalizing and inviting to pass up. There was only one thing we could do, everyone took off their shoes and went in. Overeasy and Sunnyside Up joined us. After seven days of sweat and dirt collecting on our bodies the cool water felt so good. We stayed for an hour before the call of hamburgers got too loud to ignore. With only 5 miles to go, we made it to the Kennedy Meadows store at 3:00.
There was a .7 mile road walk to get to the store. Will and I were out in front. As we walked into the store packing lot, Little Bear greeted us with a can of soda, he then yelled that The Ravens are here. All the hikers (more than fifty) on the large patio yelled, clapped, and whistled for us as we walked up to the store. This is the standard greeting. Will and I went up onto the patio and waited for Little Crow and Mama Raven to arrive. They got the same treatment. As the afternoon went on, we lazily sat with the other hikers eating hamburgers, chips, drinking numerous sodas, talking and yes having ice cream. We each had a pint of Ben and Jerry’s. As hikes came in, we joined in the clapping and yelling celebration of congratulations.
Kennedy Meadows, is a major point on the PCT. It delineates the end of the desert and chaparral and the beginning of the Sierra Nevada’s. As we move forward into the Sierras we will stop having so many water problems. The daytime temperatures will be lower and we will be in trees most of the time. The hiking will not be easy, it gets harder. Our daily mileages will drop. We will have snow to contended with and major river crossings. Reaching Kennedy Meadows is a major milestone for the hikers. To get there, you had to work really hard!!!  For many, probably the hardest thing they have ever done. Hiking Southern California is difficult with its extreme temperature variations and lack of water. It is more than a physical challenge but instead a mental problem. The harsh environment takes its toll on many would be thru-hikers bodies and souls. When we all began this adventure, we wonder to ourselves if we, as individuals, have what it takes to get to Kennedy Meadows. We even look at each other and silently wonder who will make or not. A few hikers have confided in us that when they saw us, a family of four with a nine year old and thirteen year old, they did not think we would make it very far. We have out lasted a lot of other hikers and we are at Kennedy Meadows along with many others that have persevered. The Ravens would like to congratulate everyone who have made it to Kennedy Meadows! 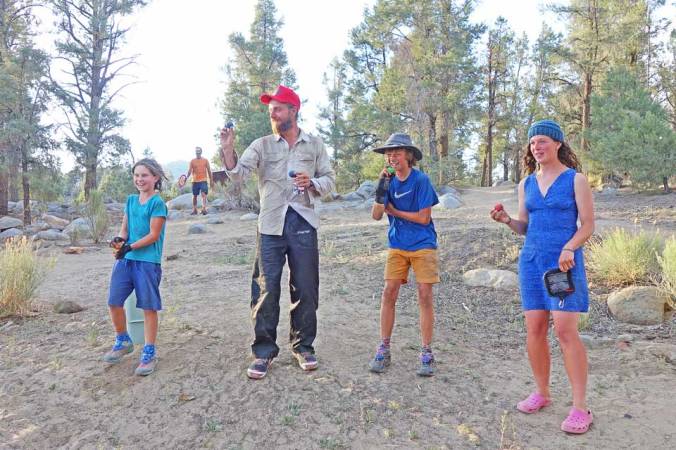 The Ravens with Houdini and Sobo 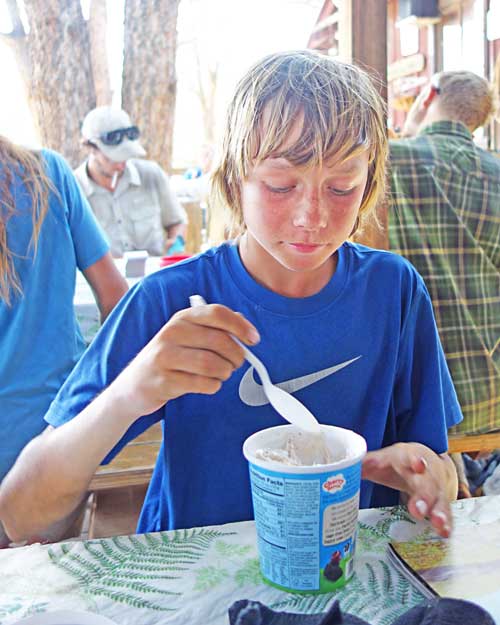